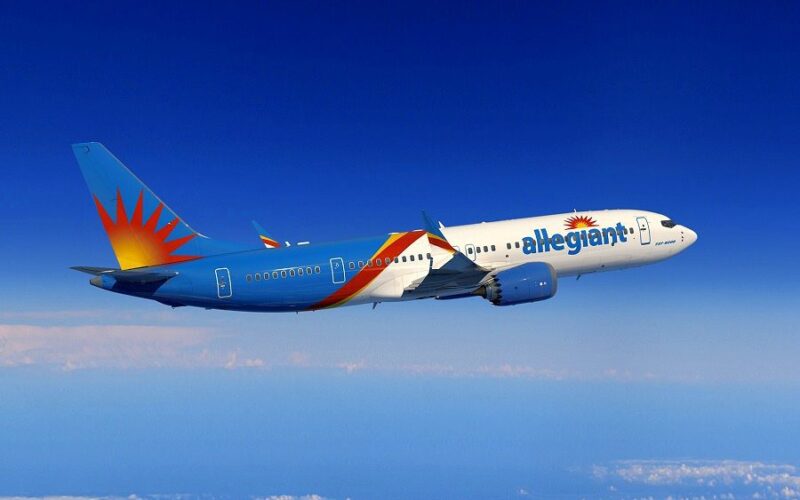 Low-cost airline Allegiant Air has placed a firm order for 50 Boeing 737 MAX aircraft with options for 50 more, which will gradually replace some of its more than 100 Airbus A319s and A320s.

After “losing” Qantas, then KLM and Transavia, the American aircraft manufacturer is taking revenge on its European rival: the low-cost flight specialist Allegiant has placed its first direct order with Boeing for up to 100 re-engined single-aisle aircraft, including the smallest model 737-7 (30 farms) and the large capacity 737-8-200 which had already won over Ryanair and VietJet Air (20 farms). The subsidiary of Allegiant Travel Company (Las Vegas) operates 22 bases in mainly secondary airports, and has an exclusively Airbus fleet, with 35 A319s and 86 A320s fitted out to accommodate 156 to 186 passengers; but it had already flown six Boeing 757-200s between 2010 and 2017.

The configuration of the future MAX has not been revealed, a first group of planes to be delivered in 2023 then the following during the following two years. According to Allegiant, they will be used to replace the oldest Airbuses (average age of 16.5 years for the A319s, 14.1 years for the A320s according to Planespotters), but also to reinforce the fleet in order to “maintain the planned growth of 10% per year.

“Our approach to the fleet has always been opportunistic, and this exciting transaction with Boeing is no exception,” Allegiant CEO Maurice J. Gallagher Jr. said in a statement. focus on pre-owned aircraft, the injection of up to one hundred 737s directly from the manufacturer will bring many benefits for the future, including flexibility for capacity growth and aircraft retirements, significant environmental benefits , as well as modern cabin layout and features that our customers will appreciate.” Allegiant will therefore continue to procure second-hand Airbuses (it has ordered only 13 new ones), its last contract for 10 copies with ALC dating back to last August.

Boeing points out that with “commonalities and improved fuel efficiency, the 737 MAX family allows airlines to optimize their fleets across a wide range of missions. The 737-7 offers low operating costs that allow carriers to open new routes with less economic risk, and the larger 737-8-200 offers additional revenue potential and is the right size for the expansion of the ULCC market. Compared to the current Allegiant fleet, the new 737 models will reduce fuel consumption and carbon emissions by 20%.”

“We are delighted that Allegiant has chosen Boeing and the 737 MAX as they are positioned for future growth, improved efficiency and operating cost performance,” said Stan Deal, president and CEO of Boeing Commercial. Airplanes. “This agreement further validates the economics of the 737 MAX Family in the ULCC market and we are pleased to stand with Allegiant as they integrate these new aircraft into their fleet.”

The two new partners will partner for entry-into-service support, enabling a smooth transition as Allegiant adds the 737s to its operations. The low cost will also use a suite of digital tools from Boeing Global Services to further improve operational efficiency. The low cost has also signed a 12-year maintenance contract with CFM International for the LEAP 1-B engines of the 737 MAX as well as those of its existing fleet.