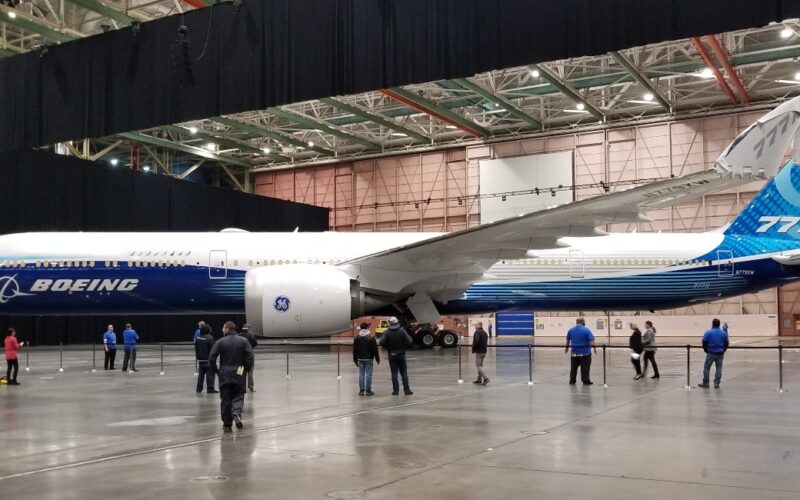 Boeing on Wednesday unveiled a record loss of $ 12 billion for the year 2020, marked by the consequences of the Covid-19 pandemic on air transport and the crises of the 737 MAX and the 787 Dreamliner. The first deliveries of the 777X are now postponed until the end of 2023 at the earliest.

Financial results for fiscal 2020 show sales of $ 58.158 billion, down 24% from the previous year. The heaviest net loss in Boeing’s history reached $ 11.941 billion, from an already record loss of $ 636 million a year earlier. The US aircraft manufacturer’s cash and marketable securities total $ 25.6 billion, while its order book “including more than 4,000 commercial aircraft” is estimated to be worth $ 363 billion. The Group underlines in its press release that it “continues to strengthen its security processes, improve its performance, manage its cash flow and transform itself to face the future”.

“The year 2020 has been marked by profound societal and planetary upheavals that have significantly affected our industry. The exceptional impact of the pandemic on commercial air travel, coupled with the grounding of the 737 MAX, impacted our results, ”said David Calhoun, Chairman and CEO of Boeing. “I am proud of the resilience and dedication that our global team has shown in this context, as our Group has strengthened its security processes, adapted to its market and supported its customers, suppliers and communities. where it is present, ”he added.

“Our balanced portfolio of defense, space and services programs continue to provide us with important stability as we lay the groundwork for our recovery. The pandemic will continue to pose challenges for the commercial aviation industry in 2021, but we remain confident in our future, resolutely focus our efforts on safety, quality and transparency, and do everything we can to rebuild trust and transform our business, ”said David Calhoun.

For this year precisely, Boeing has unveiled its production plans for all of its commercial aircraft: the FALs in Everett and North Charleston will produce each month “progressively up to 31,737” civil and military, three 767 (freight and military) , “0.5” 747 (one every two months therefore), five 787 Dreamliner and two 777 (including in version X). According to CFO Gregory Smith, around 440 MAX and 80 Dreamliner are still waiting to be delivered to airlines excluding new productions, with the majority of the 787s expected to be delivered by the end of the year. This day is not really a surprise: the postponement until the end of 2023 at the earliest of the first deliveries of 777X. “This timeline, and the resulting financial impact, reflects a number of factors, including an updated assessment of certification requirements globally, the Group’s latest assessment of the impact of the COVID-19 pandemic on market demand, and discussions with customers about aircraft delivery dates, ”said Boeing in its press release.

Good point, however, the return to service of the 737 MAX in the United States and in several other regions: it was “an important step” for Boeing, which continues to follow the decisions of global regulators (including the European EASA and the CAA British yesterday) and “to support its customers”. Since the FAA approved its return to service last November, Boeing has delivered more than 40 examples of the 737 MAX, and five airlines have returned their fleets to “safe” service: GOL in Brazil, Aeromexico in Mexico, American Airlines in the US, Copa Airlines in Panama and WestJet in Canada have “flown more than 2,700 commercial flights totaling approximately 5,500 flight hours.” The CFO explained yesterday that “cumulatively, we have accumulated [on the MAX] a liability of $ 9.6 billion for estimated potential concessions and other considerations”; To date, “we have made $ 3.7 billion in customer payments in cash and other forms of compensation, including $ 600 million we paid this quarter.”

Finnair opens a flight between Helsinki and Seattle

United Air Lines is back on the Newark-Bergen route