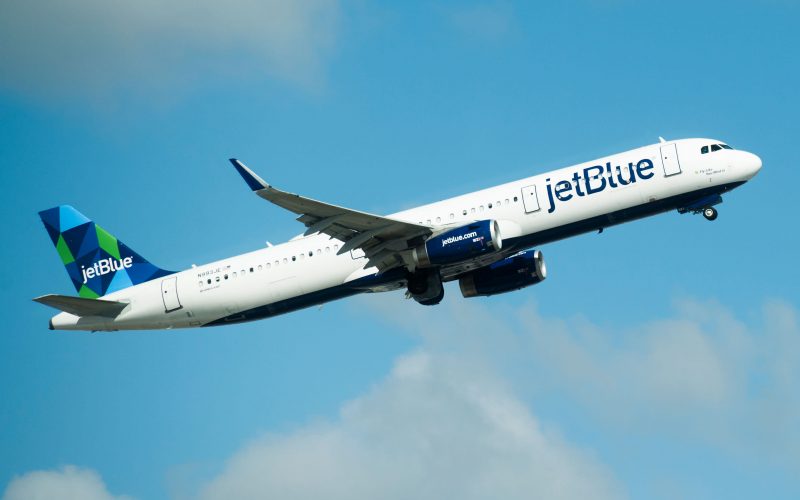 Low-cost airline JetBlue Airways has inaugurated operations between New York and London, pending announcement of those departing from Boston.

While in the opposite direction Norse Atlantic has postponed its first transatlantic flights until next year, the American specialist in low-cost flights is launching the first commercial flights between its base in New York-JFK T2 and London-Heathrow airport, operated by Airbus A321neo LR which can accommodate 24 passengers in Business class Suite and Studio in the new Mint classes, and 114 in Economy class (including 24 in “Even more Space”). Departures are scheduled at 9:50 p.m. to land the next day at 10:10 a.m., with return flights leaving Great Britain at 2:05 p.m. to land at 5:30 p.m. JetBlue competes on this first transatlantic route with American Airlines, British Airways, Delta Air Lines, Virgin Atlantic and United Airlines.

This rhythm will be reduced to four weekly rotations within a few weeks. JetBlue has not yet opened reservations between Boston-Logan and Heathrow airport, for which it has obtained 90 slots; it will then face American Airlines, British Airways, Delta and Virgin Atlantic.

After having obtained the desired slots at Heathrow in the spring and then the green light from the British CAA, operations to London in the A321LR have already been tested by JetBlue. The airline has received 20 Airbus A321neos to date (65 still expected), most of them configured with 200 seats in Eco class; only one offers the transatlantic configuration, three others have the Mint class in 16+144.

CEO Robin Hayes has pledged to “ensure” that the arrival of JetBlue leads to a “sustainable and long-term decline” in ticket prices between Britain and the United States. Heathrow “is one of the busiest airports in the world, and our initial program is made possible thanks to the temporary availability of slots from last year”, recalled the leader, the airline must continue to work with the coordinators slots and the US and UK governments to “identify long-term pathways to continue to serve Heathrow”.